“Appreciate and respect the silence, at this very moment! This is the most important aspect of my ars poetica. I lay emphasis on active listening, transparency in music, respect for the composer and freedom for the musicians.”

Ertüngealp Alpaslan was born in a Greek artist’s family with a piano teacher mother and ancestors who were real masters in various forms of applied arts. He started playing the piano at the age of 6 and one year later he was already a pupil at the Conservatoire in Istanbul.

“I was studying the piano, but I wanted to be an astronomer working at Nasa and my father did not want me to become a musician- it was a real dilemma. Thus I became the best student of the Deutsche Schule (International German School) Istanbul.”

However in 1986 he visited the Karajan Academy in Berlin whose director advised him to further study the piano because of his extraordinary musical talent and recommended three conservatoires (Moscow, Prague and Budapest). He chose to study piano at the Liszt Academy of Music in Budapest.

“By that time my father reconciled with my decision of being a musician, he only asked me not to be a conductor.”

He finished his studies as a pianist with the best professors of the Academy (Ferenc Rados and György Kurtág to mention the most important ones), but he had always been attracted to conducting and was very interested in and well-acquainted with the orchestra repertoire since his very early ages. Despite being an outstanding talent in piano (he recorded all Pizzetti chamber music with Leila Rásonyi and László Fenyő for Naxon/Yellow Label) he started his conducting studies and soon as a young professional he was awarded the third prize at the International Conducting Competition of the Hungarian TV “János Ferencsik” and the Prokofiev Conducting Competition in St. Petersburg in 1998 and 1999 respectively. After his first successes as a conductor, he won the Mitropoulos International Conducting Competition in Athens in 2002, which brought him the well-deserved reputation as a young conductor. In the meantime his piano career came to a halt due to a car accident when his hands were injured badly. 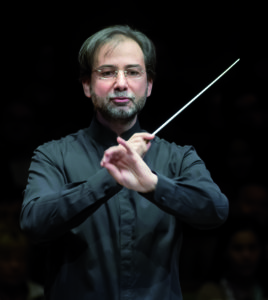 Many international tours and Hungarian concert proposals followed his successes. Alpaslan Ertüngealp was invited to the Deutsche Kammerphilharmonie Bremen, Athens State Symphony Orchestra, Saint Petersburg Philharmonic Orchestra, Royal Philharmonic Orchestra, Komische Oper Berlin to name some and toured to Japan and Brazil. From 2001 he was the principal guest conductor and from 2006 the Music Director of Savaria Symphony Orchestra. In 2002 he founded the Academia Hungarica Chamber Orchestra, his international touring project with he best Hungarian Musicians handpicked from the best Hungarian orchestras. Apart from the European and world tours, the most important Hungarian engagement of Academia Hungarica took place in 2013 at the Franz Liszt Music Academy, when Alpaslan Ertüngealp and his orchestra performed Mozart’s Magic Flute at the inauguration of the newly renovated and rebuilt Solti Hall, playing in period instruments over nine performances.

In 2011 Alpaslan Ertüngealp was invited by the legendary Claudio Abbado to be his artistic assistant after Gustavo Dudamel and Daniel Harding retired from this position. As a result Maestro Ertüngealp had the opportunity to work closely together with the Abbado and his ensembles (Berliner Philharmoniker, Luzern Festival Orchestra, La Scala Orchestra, Maggio Musicale Fiorentino, Mahler Chamber Orchestra and the Orchestra Mozart) and get acquainted with leading soloists like Martha Argerich, Maurizio Pollini, Maria Joao Pires, Jonas Kaufmann, Isabelle Faust, Anne Sofie von Otter to name some. His main and first responsibility was assisting Abbado on stage. Later on he became the supervisor to all artistic work and stage work, including, lighting, stage design, communications, archives and recordings.

“He did not teach anything, I had to learn; as an assistant I had to watch and catch everything, observe how he behaved, reacted and spoke with others, how he prepared for a concert, how he used the score. I also inherited conducting secrets directly from him. I’m sure that my students and those who work with me will be able to catch these because I love to give them over to the younger generations.”

Alpaslan Ertüngealp has an outstanding repertoire, he has conducted more than 750 orchestral works and operas. As a young conductor his repertoire focused on ‘Hochromantik’, then on to the 20th century but Mozart and Schubert are always among the favourites just as Bartók, Brahms, Schumann, Haydn and Debussy.